Looking for the ideal setting to host a small wedding ceremony? The Tavern grounds are now available for event rental, see links below for permit application. 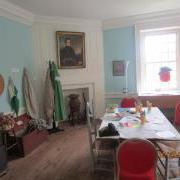 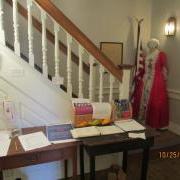 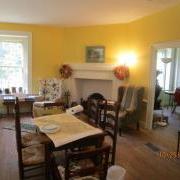 The three photos above are interior images of the

The Rodgers Tavern Museum is open on Saturdays by appointment. Please contact Jennifer Pitts, Museum Director, at RTMuseum@perryvillemd.org or call 410-642-2164.

Situated on the east bank of the Susquehanna River the tavern is a monument to our country's early history and a reminder of a past way of life in Cecil County. Built in the early eighteenth century, the tavern was known first as the Ferry House or Stevenson's Tavern and was located next to a ferry established in 1695.

Here on the Post Road between Baltimore and Philadelphia, numerous travelers both foreign and American, crossed the river, lodged, and partook of food and drink. One traveler, James Kent, in describing the area surrounding the tavern, noted in 1791, "This River is one mile wide here; a view up the river as we cross the ferry is very romantic, an island is just above, and the banks are steep and rugged."

The Rodgers family was actively involved in supporting the American cause during the Revolutionary War. In 1775, John Rodgers raised and commanded a company of militia for the defense of Maryland. Because of the Tavern's strategic location on the main thoroughfare and the owner's patriotic tendencies, it was a favorite stopping place for such Revolutionary figures as George Washington, Lafayette, and Rochambeau.

Other distinguished visitors included Jefferson, and Madison. Just one year after John Rodgers bought the tavern, in 1781, Washington brought officers and troops through the Lower Ferry Crossing on his way to his victorious campaign against Cornwallis at Yorktown. Undoubtedly the tavern was filled to more than capacity with this flood of hungry and thirsty men, and surely all members of the Rodgers family were put to work to meet their obligations as hosts and fellow Americans.

Following the Revolution, Rodgers Tavern continued as a well-frequented establishment known for excellent food and entertainment. Several contemporary accounts mention the hundreds of canvasback ducks on the Chesapeake Bay, and the many fruits and vegetables of Cecil County, all of which provided delicious fare for tavern guests. George Washington noted several times in his diary dining at Rodgers Tavern on his travels from Virginia to Philadelphia.

Of Colonel John and Elizabeth Rodgers' eight children, several pursued and excelled in their chosen occupation, and married into distinguished local families, Ann Marie Rodgers married William Pinkney, Maryland's famous orator and jurist, and her sister, Mary Rodgers, wedded Howes Goldsborough. Two of the sons, John Rodgers and George Washington Rodgers served as commodores in the Navy, and a third, Thomas Rodgers, was a physician.

During Commodore John Rodgers' long term of naval service, from 1798 to 1838, he was a highly respected officer and became known as the "Founder of the American Navy". He was a first lieutenant on the maiden voyage of the U.S.S. Constellation, and later during the War of 1812, he saved Baltimore from British destruction. This tradition of distinguished military service has continued through every generation of Rodgers descendants to the present day.

Rodgers Tavern continued to be run as a tavern by Elizabeth Rodgers and later other tavern keepers until at least 1886. However, as bridges and railroads superseded ferries and carriages, the once popular route via the Lower Susquehanna Ferry diminished in use and the tavern was no longer needed. During that time, the Philadelphia, Baltimore and Washington Railroad bought the property and the building entered a period of neglect and deterioration.

In 1956, spurred by various societies to save Rodgers Tavern, the Society for the Preservation of Maryland Antiquities bought the building, and the Friends of Rodgers Tavern was organized to preserve and restore it to its former state. Through their diligence, the tavern was entered in the National Register of Historic Places in 1972. The restoration of both the interior and exterior continues today.

Rodgers Tavern is an excellent example of early eighteenth century American architecture. The stone exterior of the building, while simple in form, exhibits fine quality stone-masonry and gives a sense of tastes, and met the needs of tavern activities. The main floor consists of two parlors, a public room and a small office. Of particular significance in the front parlor are the original eighteenth century paneling and the dated (1771) fire back cast locally at the Principio Ironworks. The second floor consists of five chambers used primarily by tavern guests. The attic is roughly finished and probably served as quarters for guests' servants.